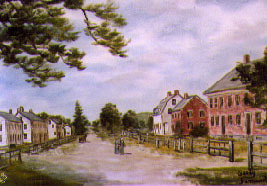 Shirley Shaker Village began in 1793. Founded by Mother Ann Lee, the land was donated by local land owners Nathan Willard, Elijah and Ivory Wildes, and John Warren. It was around the houses of these original members that Shirley Shaker Village grew and developed. Eventually there were three separate families that comprised the Shirley Shaker community. By the 1850's membership of the Church, North, and South families totaled 150 Shakers. The Church family buildings included the meetinghouse, a large dwelling, brick office, brick wash house, brick trustees shop, barns and other wooden shops and dwellings. The South family was located in Lancaster. It had a home for the aged as well as an office, dwelling house, barn, and workshops. The novitiate order was located in the North family which was made up of a three story brick shop, office, dwelling house, broom shop, barns and sheds.

The Shirley Shaker Village produced many of the same products as other Shaker villages, including broom-making, mop manufacturing, and herb production. In addition, its abundant orchards supported an applesauce industry which continued for most of the 19th century. However, the industry that was unique to Shirley Shaker Village was their cotton manufactory. This was located on the Catacunemaug Brook. When the Shakers could no longer support the factory it was sold to a firm based in New Bedford. Later the buildings were used to manufacture rope for over 100 years.

In 1908 the Shirley Shaker Village closed, and its remaining sisters moved to the nearby Harvard Shaker Village. The state of Massachusetts purchased the property and used it to house an Industrial School for Boys. In 1972 the reform school was closed. At present, the grounds of the Shirley Shaker Village are used for minimum, medium, and maximum security prison facilities. Eight of the Shaker buildings remain on their original foundations. Three others have been moved. The area was placed on the National register of Historic Places in 1976. For additional Information, see the 1884 essay published by William D. Howells. There he describes his visit to the Shirley Shaker Village.