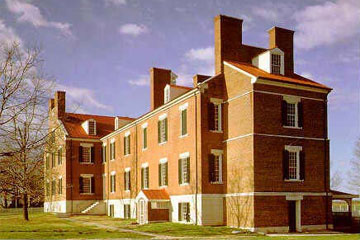 The Logan County Shakers or Believers built a neat and attractive village. The major buildings were constructed of Kentucky limestone and hand-made bricks. More than 200 buildings once composed the village. The land holdings reached 6,000 acres. The society raised all types of grain, planted extensive orchards, and introduced crop rotation to southern Kentucky. They began a successful program of animal husbandry, raising new strains of cattle, hogs, and sheep.

They established mills which served both the surrounding country and the society. South Union also had a large scale program of packaging and boxing garden seeds and preserving and drying fruits. Their products were sold throughout the southern states, much trading being done along the rivers as far as New Orleans.

The Shaker hospitality and food attracted many travelers. Stopping for meals or for lodging were such notables as President James Monroe, General Andrew Jackson, and the Honorable Henry Clay. Visitors liked to attend the Shaker worship services which were characterized by a peculiar form of march or dance, from which the name Shaker was derived.

The American Shakers were an inventive people, giving us such useful items as the common clothespin, the metal-tipped pen, the circular saw, the revolving oven, and the tilting chair. When the machine age arrived, the Shaker trustees examined the world's new inventions and bought whatever they thought would speed up their work. South Union Shakers were among the first people in their area to have a steam engine, a gasoline pump, corn shellers, lightning rods, and sewing machines. By the 1830's they had water piped into their kitchens, and by the 1900's they had bathrooms, a telephone, and a "Lilly Reo" automobile.

After 115 years of communal living South Union closed in 1922 when all the society land, building, and furnishings were sold at public auction.

Today South Union is a place to visit and to learn first hand about the Shaker way of life. In 1971 a group of South Union friends, aided by the state, bought two original buildings. These buildings, now on the National Register of Historic Places, are being restored to their original beauty through matching federal funds. These grants are administered by the Kentucky Heritage Commission. "Shakertown at South Union" is a non-profit organization.

The Shaker Museum is located in the 1824 Centre House, which is filled once again with original Shaker furniture, crafts, and textiles. Candlestands, trestle tables, early benches, chairs of all styles, children's furniture, unusual sewing tables, and both single and double stoves have come home to the forty-room Centre family dwelling house. Also to be admired are oval boxes, baskets, Shaker silk and linen, and early wooden tools as well as hundreds of other functional articles made or used by the society.

The architecture of the Centre House is pure Shaker. Multi-drawered built-in cabinets and peg strips along the walls emphasize the Shaker principles of order and cleanliness. Double room doors and the double staircase speak of the Shaker practice of separating the sexes. Transoms over the retiring room doors allowed good air circulation, one of the Shaker rules for good health.

Four well preserved buildings are now open to the public and are operated by Shakertown at South Union, Inc. They offer an extensive calendar of special events, exhibit openings, workshops, and children's programs.