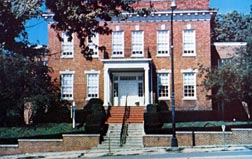 The Warren County Historical Society and Museum is housed in a three story, 28,000-square-foot brick building. It contains artifacts from prehistoric eras to the 1830s and mid-20th century periods.

Harmon Hall is the current home for Warren County history artifacts. It holds more than 30 exhibits on three floor levels displaying thousands of items that will interest both young and old alike.

The Shakers, known as the United Society of Believers in Christ's Second Appearing, came to America in 1774, guided by their spiritual leader, Mother Ann Lee. After founding communities in the east, the Shakers moved westward in 1805 to spread their beliefs.

Established near Lebanon on what is now the site of Otterbein Retirement Community, Union Village became the seat of the Shaker movement in the west. Seven settlements were formed in Ohio, Kentucky and Indiana, with Union Village serving as the mother community. By the 1840s, Union Village had reached a population of 700 believers, making it the second largest Shaker settlement after Mt. Lebanon, New York.

The Shaker religion was at its peak prior to the Civil War but soon after, membership began to dwindle. Smaller communities closed and by 1912 Union Village disbanded, its land being sold to the United Brethren Church.

The Robert & Virginia Jones Shaker Gallery offers a glimpse into the lives of Union Village Shakers. This exhibit, located on the third floor expanse, uses the Shaker principle of "borrowed light" in the form of skylights, around which the artifacts are displayed in realistic room settings. An understanding of daily life in Shaker communities unfolds as you view the exhibit.

The museum has combined artifacts on loan from Otterbein and gifts from Robert and Virginia Jones, along with its own acquisitions, to present an excellent storytelling exhibit. This Shaker collection is the finest and most complete of its kind in the Midwest and is displayed with truth and beauty. The Shaker saying, "There is great beauty in harmony," is very much in evidence here. "Please be kindly welcomed."