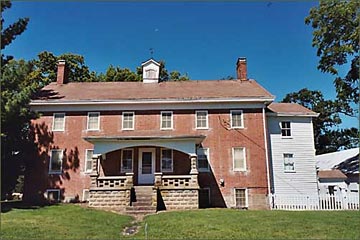 White Water is one of 19 communal villages founded between 1787 and 1824 by the United Society of Believers in Christ's Second Appearing, generally called "Shakers." It is the only one of four Ohio Shaker villages retaining most of its original buildings in their original settings.

The nucleus of the White Water settlement formed in 1822 when members of the Union Society of Shakers from Lebanon, Ohio, came to share their religion with a group of settlers living near the Mt. Tabor Methodist church, Morgan Township, Butler County. They soon found rich soil, abundant timber, and the flowing stream of the Dry Fork of the White Water River in Hamilton County’s Crosby Township and established the Village here. Early converts donated their properties, thus enlarging White Water's holdings.

Intensity of religious fervor motivated construction of the first permanent brick structure, the meeting house, in 1827, followed by a large dwelling in 1832, then workshops, a trustees’ office, barns, corn cribs, milk houses, smokehouses, a mill, and other dwellings. Crops of broom corn were the first to be planted, from which brooms were assembled for commerce. The Shakers thrived with sales of seeds, brooms, fruit products, wheat, sorghum, and livestock. As a communal society, no property was individually owned. All members participated in labors for the good of all. A principle of Shaker beliefs is celibacy; Shakers depended on attracting converts and adopting orphans.

Following the War Between the States, village population waned as strict Shaker religious practices lost appeal in favor of the liberal ways of the “world.” Industrial manufacturing reduced the market for handmade goods; the Shaker seed market declined and was discontinued at White Water; farm labor had to be hired from the "outside" neighborhood. A fire in 1907 destroyed the largest dwelling, a popular Elder died in 1910 after a prolonged illness, and the Shaker school was closed – all contributed to the demise of the community of White Water.

The Hamilton County Park District purchased land between 1989 and 1991 to expand the Miami Whitewater Forest in northwest Hamilton County. About 600 acres included in the purchase had once belonged to the Shakers, and there stand more than twenty Shaker-built structures that comprised the White Water Shaker Community.

The Park District removed post-Shaker structures and stabilized, cleaned and painted the remaining buildings. Due to the Park District's mission focus on outdoor recreation and preserving land and habitat for wildlife, and concern for the high cost of restoration and upgraded infrastructure the Village would need, no restoration, beyond preservation and stabilization, has occurred. The buildings have a story to tell, but at this time, are silent.

Friends of White Water Shaker Village, Inc. is working with staff of the Park District to develop preservation, conservation and restoration strategies. Funding will be the key. We believe that the village is an important part of the cultural heritage of America and should be open for all to learn about Shaker communal history, their place in American architectural history and the importance of preserving examples of our past.

The village is located twenty-two miles west of downtown Cincinnati and five miles from Interstate-74 in the Miami Whitewater Forest Hamilton County Park near Harrison, Ohio, on Oxford Road between New Haven and the Butler County line.